Learning how to read topographic maps and identifying terrain features are critical skills for our young aspiring geologist-or anyone for that matter! My husband swears that he used this handy (pun intended) trick to remember different terrain features while in the military and it has been a great tool to teach our 4-year old.

To use this trick with your little ones, start by making a fist. 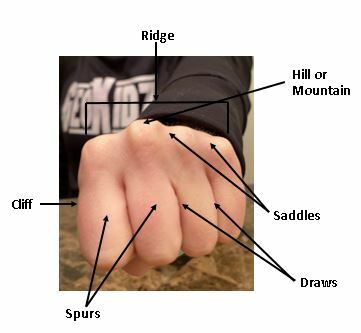 Each individual knuckle is used to illustrate the shape of a hill or mountain. So which knuckles are hills and which are mountains? Well, it turns out that according to the U.S. Geological Survey there is not an official difference between hills and mountains. However, we generally differentiate hills as being less steep and not as high as mountains. Hills probably resemble the knuckles of your pinky and ring fingers and mountains resemble the knuckles of your pointer and middle fingers.

After teaching the terrain features formed by a closed fist, open your hand and use your palm to illustrate a depression or basin and the spaces between your fingers that form valleys that drain into the palm or 'basin.' 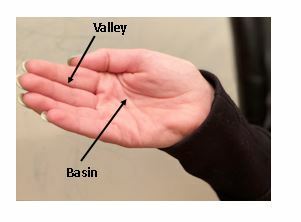 This handy illustration leads into many other discussions on geology! I like to use it to illustrate other concepts such as what is the continental divide! We do this by playing a thought process game of which way would a drop of water flow!